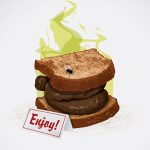 I keep reading and seeing and all but running into quotes about the shit sandwich. Kristen and Rachel wrote about it today. Elizabeth Gilbert talks shit eating in Big Magic, and she got the idea from Mark Manson. The premise is simple — there is no pleasure without struggle. No free rides. No success with effort. You don’t get to the finish line by simply staring at it, you have to be willing to do the work.

And I super get that. And agree with it. And believe it.

And, I’ve been holding onto this premise that there is some magical exception to the rule, and maybe I could be it. I suppose I believed that if I tried enough varieties of shit, put my time into testing them out and paid my dues, then I’d get to live the rest of my life basically shit free.

As in, I could just write, and teach yoga, and live simply with my adorable family on a beach somewhere and it would all be champagne and cake from there.

But it doesn’t work quite like that. Happiness comes at a price. It’s free, but it’s complicated by modern day living and choices.

For example, practicing yoga in my community at my studio is both my electrical outlet and my grounding cable. Being there costs money or time spent in service. Meditating requires dedicated time in a busy day. Yes, it’s worth it. Yes, the rest of my day will be more productive as a result. It still takes time. Eating clean, organic, whole food is remarkably expensive, and finding alternatives like community gardens, bartering, service, or time and space to grow my own food is not a simple task.

So, if I did nothing but teach yoga, played Farmer Michelle and home schooled the children on our homestead then I suppose I wouldn’t need to make much money. Right? Except I also love to travel. And eat out. And live in the city. And connect with my community. And be a part of something bigger than my own tiny bubble. And make a positive impact on the world. And have other people share responsibility for educating the little people. And, also, say, not sew my own clothes by hand and candlelight. . .

So instead I choose to seek the perfect struggle. And here’s how that looks— a whole lot of me starting and quitting things and ideas. Like a lot. A lot, lot.  I may like to say the word shit, but I sure as fuck don’t like to be told to eat it. If I’m going to consume crap, I want a choice in the flavor and frequency. And when I know something is not for me I roll out hard and fast. Staying is simply not worth it to me. I can’t digest that.

When you are trying to figure out what to do with your life, walking away early gets easier to choose. After that initial jump, that first time you are willing to say “not this” you build power to do it again, and again, and again for as many times as it takes until you reach yes.

Sometimes walking away is the shit sandwich. Being willing to say no doesn’t always feel good. It isn’t without consequence. It’s risky. There will be casualties. You get to decide if they are worth it.

I want to do three big things in my life. I want to write, I want to share yoga, and I want to coach. I want to help others to be the best version of themselves while I do that, self included. I need to be of service, it is who I am at my core, and I won’t to do it at the expense of my health and well being or of my family’s.

Thus I continue to walk; it is a part of my commitment to myself and to them. It is the thing I am willing to do to get where I want to go.

One thought on “EAT SHIT?”