So, my calendar told me it’s December. And you know what people do in December? They write Holiday letters to people to tell them about all the things they did that year that they already shared on social media. And then they pay to mail the cards to people, with a sweet family photo, like this one: 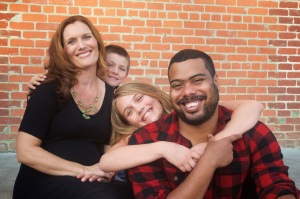 Doesn’t my hair look great? I mean, uh, aren’t we the cutest?

But you know, it’s not my style to give you the curated version of our lives, because: 1) nobody likes a fibber, b) people need more authenticity in their newsfeeds and their lives and iii) our day to day is much, much more entertaining than any story I could actually make up.

So, without shame or restraint, I offer:

Dear Friends, Family, and People That Don’t Fit In Either Category;

2016 has been pretty fucked up, hasn’t it? I mean, for fuck’s sake, a bunch of amazing people died, our government is going to shit by the tweet, the economy is doing scary things with acronyms, and White People are finally coming to horrifying grips with the fact that not only did racism never go away in America, it’s entirely our fault it didn’t. And, now a bunch of deplorable individuals are coming together, empowered to engage in acts of hate and celebrate it. Fucking. Disgusting.

This is a really upbeat letter isn’t it?

But okay. Let’s hit pause on that for this tiny moment in time.  I promised humor, and none of that shit is funny.

So, with the understanding that 2016 was no one’s year, we still did some good things. Some super good things actually, and we still have 30ish days left to do some more. Here’s what’s new with us:

Oh my. Oh, oh my. She’s 11 now, and taller than most of my adult friends already. No, I am not exaggerating. Remember how I said I sometimes wore her pants? Yeah. I’m seven months pregnant and that basically never happens anymore. But. If it weren’t for this belly… it would be.

Shut up. I can shop in the Juniors section if I want to (be ridiculous and embarrass myself and my family. Even more).

She’s looking even more beautiful and adulty than ever, but refuses to brush her very thick hair and has favorited a rather unflattering pair of purple glitter eyeglasses so I’m slightly less worried about boys and a lot more concerned about hygiene and self care. She resembles my awkward 7th grade look — nose in a book wearing pink glasses with a perm gone bad — so much I want to cry with (for?) her. Really.

She’ll grow out of it, too quickly I’m aware. She’s quite the conversationalist, loves volleyball, animals, and drawing comics, and is just about as distractible as her mother.

She was given a phone this year (not my idea…) and is currently amazed on the reg with the capabilities of imessage. If you’d like to engage in an emoji war, and lose, I know a girl…

Overall though, she’s a pretty great kid and I kind of like hanging out with her. I think I’ll keep her. Like forever.

Oh.My.God. That kid. He has his own hashtag now- #ohRory, although so far I don’t think he knows it.  The things he does are that ridiculous. In fact, when my phone rings, and I see the school is calling I start making an exit plan before I have even said a remorseful “hello.” Except that sometimes, the school calls to tell me shit like “Rory sat down during the fire drill today instead of standing” and I have to near physically restrain myself from showing them from exactly whom Rory gets that kind of Zero Fucks attitude . . .

He’s a third grader but knows more than most tenth graders, has the vocabulary of a Liberal Arts school Science Professor and has some very Sheldon-like people skills so it’s easy to see why he makes friends so quickly.

When he’s calm, he’s puppy dog lovable. When he’s not calm, he’s helping us earn parenting awards. Overall, he’s an awesome kid and he’s going to grow up and do awesome things. And tell you about it. Using big words. But you know, I’ll keep him too. Mostly because he’s probably going to live with us until he’s 30, but also because he’s pretty cool.

I did a lot of reflecting, changing my mind, and resting my physical body this year (not really on purpose on that last bit…). For one, I totally renegotiated on my master plan to leave education for good, partly because I realized that teaching is probably, maybe, definitely a part of who I am, por dos because I super-duper suck at Sales and I’m not afraid to own that, and for three, four, and five, because it just worked out that way at that time for that reason.

It also turns out I wasn’t actually done wanting to have kids. This surprised everyone. Me, and I think most especially my husband…

I finally recovered from my injury the Fall before, then had hernia surgery, started to heal from that and then despite medical suggestions that my “advanced maternal age” of 35 (then) might make conception difficult, Baby 3 was on his way before we even made a game plan to delay his creation. Whoopsie. Fertile Myrtle over here. So, what I’m really saying is that I spent a lot of time on the couch from January to August, okay? Not so much running. Not nearly enough yoga. Way too much feeling like crap. It’s so weird how basically none of my clothes fit after that.

But, my second trimester has been a full out life sprint, so I totally made up for all the reclining. I restarted my contracting career over the summer, starting writing on the HuffPo platform, got an offer to have a piece I wrote there published in a textbook, and agreed to teach three College classes a week. We moved on Labor Day weekend, and then in October we bought a yoga studio with our business partners. Not just a yoga studio, THE yoga studio. The one we manifested. And, the one I’m managing and teaching at three times a week. While also keeping 8-10 clients happy a month. And wearing my English Professor hat. And parenting two kids each in a different sport and club. And growing a baby.

My third trimester starts this week, and I’ll be taking another break from teaching shortly after that so I can have and be with the baby, dial down the crazy-meter a little bit and focus my time and energy on providing kick-ass work for my clients and growing our new yoga home and community. I am sure I will totally chill. For like a week. Or a day. Probably most of one day. I can commit to that.

My husband is my favorite favoritest of all my favorites. I mean, we are real married, not fake married, so you know, he does things that drive me bat shit crazy to be sure. Like, for example, does he know about magical inventions like garbage cans, dishwashers, or say… laundry hampers? Maybe I should label them? Or make some YouTube videos about how they work and accidentally share them with him? He also sometimes snores like an entire cave of bears with colds, but, I steal covers and am mean when I’m hungry or woken up at night so… balance.

I love our life and the way we fit together. He helps me to be better every day and is one of maybe five people in my life who can say, and get me to, CTFD.

But his skills don’t end there. He has a new job with CCSA, working to make high quality education accessible and realized for ALL children, does beautiful freelance graphic design, teaches yoga at and helps me manage our yoga studio, and is on more committees than I can actually remember the names of. He’s getting all excited about getting involved in politics on the ground level, and I’m already realizing this means that I’ll be required to wear real people clothes to fancy events a whole lot more. Maybe Lulu will start making formalwear. It could happen.

I’m SO.FUCKING.EXCITED for him to Dad-it-up with our little guy. He’s going to be amazing. He’s already fantastic with the two we have, but this is like, next level shit for him. I can’t wait for the babe to get here. Except, as long as he stays in my belly I get three foot rubs a week so. . . no rush dude. Take your time.

We took a few trips this year, rationalized ourselves into not one, but two sparkling wine clubs, went camping in the rain in Yosemite, and got a dog. Her name is Pippa. She is tiny and cute and has terrible manners and someone should probably do something about that sometime. 1, 2, 3, not it!

Anyhow, in the midst of the chaos, despite the crazy, and in full gratitude of the abundance around and within us, we’re all pretty fucking happy. It’s been a long challenging year, there’s a whole lot of shit-talking left to do about 2016, but instead, for now, I just want to wish you all,