I was six, maybe seven the first time I truly remember feeling anxious.

We lived in a very rural area on a large farm surrounded by other farms. A handful of paved two lane roads weaved in between them, connecting neighbors to one another and to the few tiny towns that nestled in between the tall blue mountain ranges that framed our narrow valley. Most of the kids who attended my small elementary school rode one of the three long yellow school buses to school and back each day.

I remember the musty green seats I’d rest my tired straw blonde head on, the ribbed aisle floors that I must, at all times when the bus was moving, keep my limbs from touching, and the windows that my small hands would struggle to move up and down. I hated riding the bus. I hated the cold mornings watching my breath steam in the air as I waited, shivering, alone on the side of the road. I hated the sticky hot kid smell in the afternoons and the way my bare legs would glue to the seat anytime I wasn’t in pants, causing this sort of suction-like sound when I’d rise to leave. I hated the constant noise, the fighting, the spitwads that landed in my hair and on the ceiling, the name calling, the ever present swell of tension as children prepared for entry to school or home.

But I hated it most the weeks that the neighbors were moving cows.

Our farm was large and stretched two miles from gate to gate The front of the farm could be entered from Island Road while the back of the farm, which was the side my family’s house was on, was only accessible from Eastside road and then up another quarter mile of dirt road through our neighbor’s property, with whom we had an easement agreement to use. If I chose to get off the bus at the front gate I had a two mile walk home which included a relatively large and steep hill to climb, but very few animal encounters that alarmed me, and if I chose to get off another 30 minute ride later at the back gate I’d get to walk down that dirt road between feedlots full of cattle.

While a front gate exit meant I’d be in for a long walk, I knew that I was likely to see my dad somewhere along the way, wave at my Grandma as I climbed her hill, and see only animals behind fences or dogs that were ours, save for a few years later when the one rather ferocious German Shepherd chained up in my Uncle’s front yard would bark and pace incessantly when anyone, especially me, came by.

A back gate exit meant I’d be met with a pack of the neighbor’s dogs who’d chase me all the way down the road to our gate. These included a Great Dane, a Saint Bernard, and usually another 2-3 smaller dogs who would follow them. Although I’d been told that they were “nice” and that I should just firmly tell them “no,” my heart would race, my voice would shake, and I’d walk as quickly as my little legs could carry me without running, because I was sure that running would lead to more chasing, and more chasing, well, I didn’t want to know what more chasing would mean.

This would happen every morning when I walked to the bus, and every afternoon when I’d walk home from the bus. As soon as they could see me the dogs would come running and stay with me until I’d get to the gate, where our dogs would sometimes meet me. I don’t know what magical power that fenceline had, but somehow each set of dogs seemed to know exactly where their terrority started and ended and was determined to protect it fiercely. I walked that road for ten long years, and those damn dogs chased after me every single day.

Maybe I wasn’t friendly enough. Maybe they sensed my fear. Maybe they just enjoyed it. I really don’t know, but what I do know is that I loathed this routine with my entire being.

I hated the bus. Every single thing about the bus. Getting to it. Being on it. Getting off of it.

But none of that was ever so anxiety producing as the months that the neighbors would be moving cows. I don’t remember the exact time of year, oddly, though I think it must have either been spring or fall, or maybe both. What I do remember is that the bulls had to be separated from the cows for a time. Why, I don’t know. For exactly how long, I also don’t know for certain, but it happened consistently and always in the same way and place.

With the feedlots full of cows and sometimes their calves, the three or four bulls in the herd would be relegated to a temporary pen created by closing two gates at the entrance, and either our gate at our property line, or occasionally the two gates from the two end feedlots. It was really inconvenient as a driver because it involved opening and closing gates at two entrances, but at least as a driver you were not on the ground with the animals. To help illustrate this, literally, here’s a diagram. 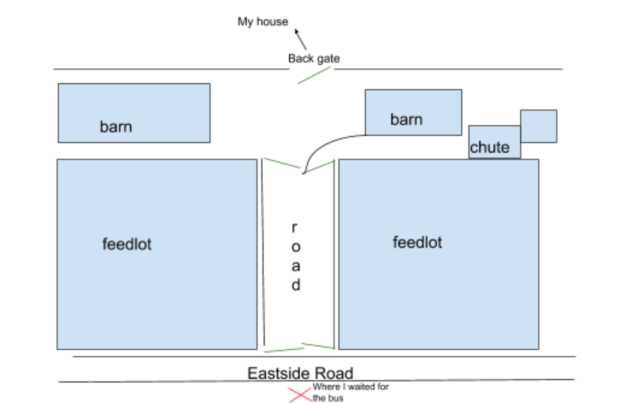 So, this means that little me, from age six to sixteen, had to get from Eastside road to the back gate, and then home somehow. My choices were to walk those two miles from the front gate, or climb the gate, walk through the temporary bullpen, climb another gate, and go the rest of the way to our house.

My parents had insisted I was just fine. Safe. Okay. No harm would come to me and I had no reason to be scared. “Just walk by and ignore them” I was directed. I remember saying this like a mantra in a whisper as I’d hug the fence line as far as I could until I’d reach a place where one was too close or blocking my way, and then I’d climb the feedlot fence and walk through inches of mud and wet manure until I felt confident enough to climb down again. On a few occasions I remember trying to walk the top of the fence like a balance beam. On another, I remember trying to go up the neighbor’s driveway (which involved even more dog encounters), climb another hill and circle my way back.

One day the neighbors saw me walking through the cows and one of them kindly rode their horse over, scooped me up and gave me a ride to my gate. My parents would laugh often about that for years after, though I don’t actually know why they found it so funny.

But, as a farm kid, I wasn’t really allowed to be afraid of animals, so, I faked it. I would climb the fence as slowly as I could, stalling as long as possible while the bus pulled way. I would stand just on the other side of the gate until the bus was out of sight, no one with a line of sight on me to ridicule me for being afraid the next day.

The risk of injury to my ego was apparently just more than I could bear and logic failed me then, as it still can now.

Once the bus was out of sight I’d climb back over the fence and plan. I’d actually already been planning. The moment I’d left the school and sat down in that dank and gloomy forest green seat I’d start to strategize and give myself a pep talk. “Which gate would I get off the bus at today? If I chose the front gate, could I make it a game and try to get to the back gate before the bus passed by on Eastside road? If I chose the back gate, how many bulls would be in? Which gates would be closed? How muddy would the feedlots be? Maybe today would be the day I wasn’t afraid anymore.”

I didn’t have the words then to know then that this is what anxiety feels like. Head spinning, palms sweaty, unable to focus. Irritated, agitated, full of worry and doubt.

Planning was my coping mechanism for this feeling I didn’t have words for. Planning still is to this day my go to default setting for all stress experiences. I immediately look for, take, or make action when I feel anxious. Sitting and waiting is excruciating for me. I have to move, and go, and do, to feel safe.

As a very small child I learned that when facing the uncomfortable if I had a plan, I would be okay.

But if I didn’t have a plan, then who knew?

That also, is still what I do.

Now, my parents weren’t terrible parents. They did the best they knew how and they did a lot of things really really well. I’m not sharing this to blame them, I’m sharing it to understand me.

So much of our daily lives are a result of three key things -— our habits, our attitudes and our beliefs. Understanding why we do what we do, think what we think, and believe what we believe is absolutely fundamental to our growth and development. Knowing where we are and how we got there gives us insight, tools and strategy for making shifts.

This awareness and detailed reflection is incredibly useful to me. It explains so much of my deeply rooted and primarily subconscious habits, attitudes and beliefs. It reveals a pillar of my anxiety, my reaction to it, and the conditioned responses that have become a part of who I am in this moment right now.

I also learned how to stuff my feelings, put on a brave face, and say everything was fine when it wasn’t.

Dark and light. Good and Bad. Lessons that served me and barriers that held me back.

I can’t truly change the way I do, think and believe until I unpack the experiences that created my present. With the help of my therapist, as I dive deeper and deeper into my why, my foundations, and my experiences by owning stories like this, speaking my truth and acknowledging all parts of me and my story I am truly beginning to confidently move forward.

There is always work to do, there will always be more to learn and new depths to explore, but being willing to do the work at all in the first place feels like a brave step for me. It feels, actually, a little bit like climbing back into that bullpen.  But this time, my support team understands that I am afraid, and I know that I am not alone.

This time, there’s a ride home for me whenever I ask for one.

3 thoughts on “The Bullpen”