Yesterday I ran the Bay to Breakers race in San Francisco, in a tutu, tired as hell, but happier than happy to be surrounded by over 40,000 fellow endorphin junkies (liberal interpretation suggested. . .). I decided, against better advice, to actually run the event, just this once, just so I could have that experience. There is also a small possibility that pride/competitiveness/ over-achieving habits came into factor here, but let’s stick with the former rationalization, shall we?

I had a great time, it was by far the coolest run I’ve ever done, hands down. The frenetic energy of sidewalks stacked ten deep for the entire course carried me through all 7.4 miles (well, that and my beats, #hiphopsavedmylife). Let me just say, this race is serious training ground for measuring reaction- in addition to getting smacked in the head by a few flying tortillas I also saw so much naked old man ass that it actually lost its shock factor. Yeah. Go ahead and try to get that image out of your head now. You’re welcome.

As usually happens on a run though, at some point, my mind wanders.  After a few miles of avoiding contact highs, mid-street dance parties, and near collisions with photo opps of amazingly costumed participants (not me- I totally failed to represent), and I finally caught up the “real runners” in the group. This of course, led to an internal monologue of snarky commentary about runners. We really are a different breed. I mean, c’mon, we run. . . for fun. As in, propel ourselves in a forward(ish) motion, joints and muscle pain be dammed, on purpose, and regularly. It takes a special kind of crazy to love this shit.

So yeah, call me crazy. This is hardly news to me.  But it might be for you. Consider, for example, the following examples of running cultural norms:

2. Goo. Yes it’s disgusting. Yes, we eat it anyway. No, I don’t really want to know what’s in it. Radioactive supernatural carbohydrate complexes, probably. And preservatives.

3. IT band pain. One can easily swap out “IT band” for “hip” “knees” “low back” or any other major joint, ligament or part of the spine that begins its slow deterioration well before your AARP membership benefits become available.

4. Shin splints. Meaning: a) time for new shoes, b) treadmill work, or c) bad decisions in terrain, training, footwear, or in general.

6. Hill training. This is also known as finding your lactic acid threshold. The colloquial reference mid the actual act of hill training, however, is actually “stupid,” or occasionally, “FTS.”

7. $200 shoes, purchased at least twice a year and worn for ONLY one purpose.

8. The expression “Cotton is Rotten.” The reason for lycra, spandex and polyester has thus been identified. Unless you like smelling like a men’s locker room and having yellow armpits. Then keep it up there, Mother Earth.

9. “Wicking fabric.”  Essential for anyone who is not a run stripper, like me, in which case this word only matters for winter run attire (occasionally), shorts, or tights.

10. “Chafing.” Chip Wilson can take his thigh gap and take it straight to the runway, ‘cuz that’s the only place that genetic mutation is found. Enough said.

11. Beer. Not just a reason to run, but as a legitimate recovery drink. Google it. The internet says it’s true. So it is.

12. “It’s only five miles.” Yes, “only.” When you regularly run 30+ miles a week five miles is really just not a big deal. Perspective is everything.

15. Heavy Medal(s). Yeah, no not Def Leapord. Equally reeking of ego inflation, however.

17. Race Rookies. You can spot them because they are usually wearing the race shirt. Like for that actual event. From the same year. . .

18. Rungry. Term for the state of mind found in the last third or so of your run.  Brain is flooded with little thought clouds of hamburgers. And pizza. And maybe even doughnuts. And DEFINITELY peanut butter.

19.  Short term memory issues. “I am never doing this agai…, hey wait, is that a discount code for the next one? Let’s sign up!”

20. “Events” listed as a legit item in your monthly budget for necessities. Right after “food,” and just before “fuel.”

Still don’t get it? Don’t worry, you will. Somehow, someway, someday, the rhythm is gonna get you. 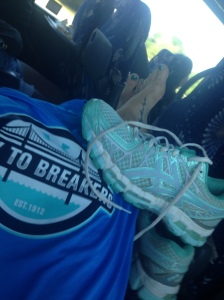